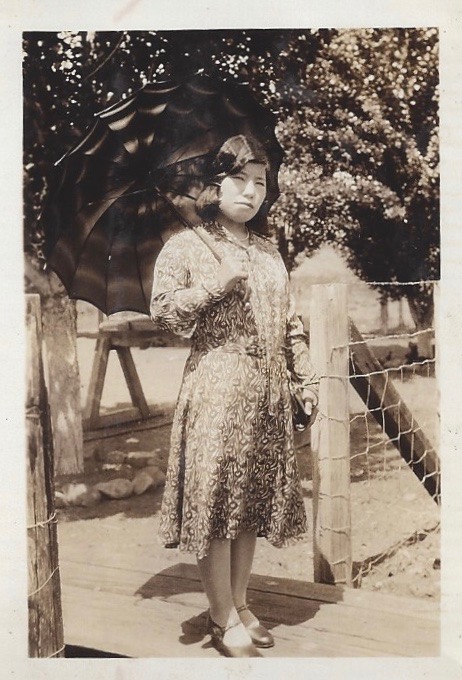 Although my memories of those early days are dim and probably romanticized by my amnesia, I was soothed by the comforts of the everyday familiar and the assurance of the presence of my parents. In contrast, I would imagine that a certain level of loneliness existed for my mother. Every day our father would join his work crew traveling on a handcart to repair the railroad ties and our mother was left alone to care for the three of us.

However, when birthing her three children, my mother traveled to Portland to place her faith in a Japanese midwife. During these times she renewed her friendship with a family friend, the wife of a Japanese diplomat who was partly responsible for the matchmaking between our parents. Yaeko who was the same age as my mother was pregnant with her twin boys and enjoyed the skill of their mutual midwife.

Yaeko, gentle, kind and filled with quiet joy, was an American-born Nisei who took a liking to my mother Noriko. She took her shopping, chose fashionable heels, bought patterned silk dresses, introduced her to makeup and current hairdos, and old photos reveal my mother wearing her fashionable clothing posing with an umbrella held overhead. Yaeko and her husband would invite our family to join them while vacationing in Crater Lake or visiting Jantzen Beach, a playland center in Portland, Oregon. My mother as a young immigrant was an inexperienced cook and Yaeko provided her with recipes. Their closeness grew over the years.

However, with the outbreak of WWII, upheaval overtook both families.  Our family was sent to a concentration camp in the interior desert of Idaho whereas Yaeko and her husband, a member of the Japanese diplomatic corps, and their family were immediately expelled from the United States and they found themselves back in Japan enduring the trials of the war years. Before they boarded the ship, both families met to bid each other farewell. The twin boys, at 9 the same age as my older brother, brought their family Bible and gave it to him.

The transition proved to be difficult for the twins and for Yaeko; their education didn’t provide them with passable Japanese language fluency and culturally, they were inept and uncomfortable. Although from all outward appearances, they were Japanese, all three were steeped in American life and considered outsiders.  Later Yaeko had written of her difficulty submitting to the strong social mores expected of her as a female. Even the simple task of greeting a visitor required Yaeko to first kneel, then slide the door open, and finally bow in supplication. 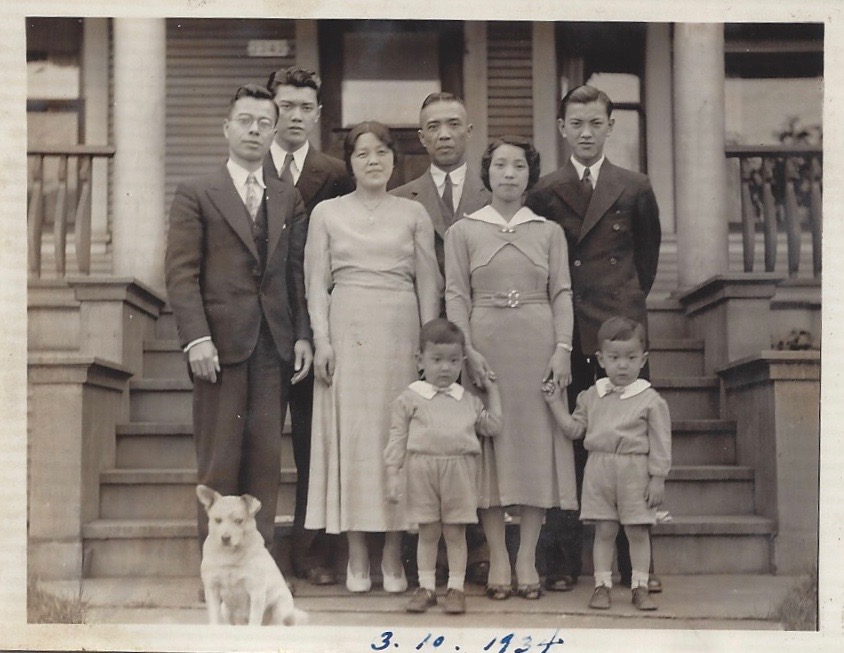 Yaeko with her twin boys and far left is her husband.

After the war, during the occupation, the twins had the advantage of speaking English. They were able to easily interact with American GI’s and were able to cajole sweets and the rare cigarettes from them. Later, as American citizens, the twins relocated to New York City and developed a life there.   Nearly a decade passed before Yaeko and her husband eventually came to New York City to rejoin their boys. During their journey to the East coast, they managed to contact my parents and briefly visited with them. Both graying at their temples and visibly aged, Yaeko’s sunny smile didn’t reach her eyes and her steps were slow. Their dissimilar life journeys created an awkward meeting and their earlier ease could not be regained. Especially for my mother, Yaeko’s leaving had left an ache that could not be replaced: a loving friend who had generously offered acceptance and aid to a young inexperienced 19-year-old immigrant bride.

Late last night I sat down at my desk and tried to finish the sentence “I am….” Once I had completed my 140-word bio, I felt dissatisfied with my answer. Data about my birthdate, facts that my parents were first-generation immigrants from Japan or the girl raised between two brothers obscured a backstory rich in details about my first four years of life—growing up in a closed community of family and other immigrants, values shaped by my Japanese heritage, feeling the security and safety found in the isolation of rural eastern Oregon. Distant memories of that time include the familiar sounds of the daily whistles of the passing trains on tracks behind the company house, the monotone of my father as he chanted the numbers on his abacus as he filled his reports for the railroad, the smell of the kerosene lamps lit each night, the murmur of Japanese spoken between our parents after we slept between the heavy comforters on the floor, oral rituals spoken before dinner thanking our parents for the meal, rice bowls and chopsticks set on our table, the total surrounding darkness broken by the dazzling cluster of stars above us. These and different details punctuating the lives of immigrants searching for a life of opportunity in the United States have been repeated countless times./p>

My bio would mention my family’s years spent in what was described as a “relocation” camp in the interior desert of Idaho. Today with the focus on the racial injustices permeating our current political polarization, the media has publicized the incarceration of the 100,000 men, women, and children of Japanese ancestry during WWII. Most of the first and second generations rarely discussed the personal impact of this injustice nor the unrest within the camps as the government drafted Japanese American men to join segregated units in the military. The heroics of the 442 unit have been memorialized in movies such as “Go For Broke” and books but the returning veterans joined the thousands of other veterans reluctant to revisit the horrors of war and death.

Following the pattern of most internees, my parents never spoke of their hardships after our release from Camp Minidoka, Idaho. During the next decade, our lives were dedicated to the task of surviving with our mother’s eyes locked on the future. Regardless of the family’s pressing financial needs, my mother insisted that my brothers and I put our schooling activities before everything else. My deep regret is that she never lived to see the fruits of her dreams but we and now her grandchildren are the living testaments of her future hopes.

So I am still left with completing the sentence “I am.” With this current political climate highlighting the inequality throughout our country, I am acutely aware that I am the “other.” Placing a mask around my face and weary of the pandemic, I am reminded that I am an octogenarian. I am a mother whose children now care for me as I care for my husband. And finally and simply “I am woman, I am strong, I am a survivor.”