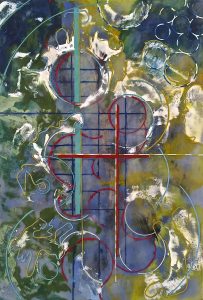 You Don’t Need No Stinkin’ Recipe by Janet Hinze (Food)

The Holdup by Robert Yoder (Memoir)

IF by Pat Gallagher (Memoir)

New Feature – Comments! Leave a note for the writers & artists in the comment box at the bottom of each page. They would love to hear from you.

The Circles, for this issue, there are four or maybe three;
but you, dear reader, are the connectivity.

Janet Hinze
Janet Hinze is the retired owner, chief cook and bottle washer of the Homemade Cafe In Berkeley, California.

Susan L’Heureux
Susan L’Heureux, a writer living in Oakland California, was recently diagnosed with ALS. “Notes From 206” appears in Issue 4 of Inter-Connecting-Circles.

Robert Levin
Rober Levin is a Photographer who lived and worked in Mendocino, California.

Nandini Raisurana
Nandini Raisurana is a 16-year-old student residing in Mumbai, India. She loves writing poetry, dancing and playing the cello and aspires to inspire people with her writing.

Peter Wowkowych
Peter, when not painting, traveling or doing yoga, is the campus architect for Sony Pictures Entertainment in Culver City, CA. His paintings are made with encaustics, an ancient Egyptian painting method which uses hot beeswax, pigments and damar resin.

Robert Yoder
Robert Yoder founded Wild Ocean Press in 2009 and has published 23 books of outstanding literature – prose, poetry and essays – by authors who deserve much wider recognition, maybe even a few National Book Awards. He is also the author of “Dear Mr. President”, 474 letters to President Obama, protesting what he sees as Obama’s betrayal of democracy. He does not tweet and Trump does not read, so he has not written to the current president.