We sat in my car parked by the beach at Todd’s Point smoking a joint; this was Mendocino after all. I had brought Robert the book of photographs we’d produced after he’d moved into the nursing home. He was pleased with the quality of the photographs.

“They capture my intent,” he said.. coughing.. holding in the smoke. 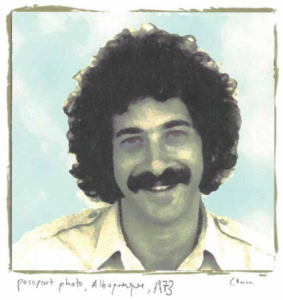 As I mentioned, the title for his small selection was Virtual Photography.  I suppose that was the intent and, in some ways, the extent of his vision. Most of the photographs were double and triple exposed images photographed in the 1970’s and 1980’s, and digitized, colorized, photo-shopped in the early 1990’s. They appeared more like watercolors than photographs and I was pleased that he was satisfied with the quality of the work.

I read his quote from the first page. ‘Photography is like magic and like magic..it’s not the wand, its the magician.’ “I really like that,” I said, taking the joint from his swollen fingers.

“I don’t know if I said that…I might have read it somewhere,” he said rather sheepishly.

“What would you have said if it were your own words?” I asked.

“I think I would say, he could have done better,” Robert said.

Robert sunk into the cushion of the car’s seat, his chest falling into the stretched elastic waistband of his dark, worn blue sweatpants, his head bowed, his eyes peering through thick round eyeglasses; an old, tired owl. It wasn’t always that way.

“So could we all,” I thought. “It sounds like something you’d see on a gravestone,” was what I said.

He laughed a bit… or maybe it was a shiver as he took one last toke on the roach. He tried unsuccessfully to reach across his body to loosen his seat belt but his girth was too great, his muscles too atrophied, and his dexterity too limited. I unbuckled it for him and opened the windows of the car letting out some smoke and in some air. Robert tossed the roach out the window where the wind carried it with the sand blowing across the parking lot tarmac. We listened to a herd of seals barking at gulls skimming across the tops of waves in an ocean filled with whitecaps. I lit another joint and took a deep drag.

“You know what my wife wants as an epitaph, Robert.”

“Well, when you die.. and you’re buried next to her… well, she won’t be alone anymore,” he said. He was serious.

“Hmm… maybe my gravestone should read, “Not So Fast Darling, Move Over!” I exhaled in his direction.

“I don’t think that would be fair,” he said.

The photographer shrugged as best he could, pulling his chin up from his chest.  A gull had landed on the hood of the car. Robert formed a rectangle with the thumbs and forefingers of each hand framing the gull.  He clicked his tongue as he would a camera.

We sat stoned in our own thoughts. He, immersed in Virtual Photography; Me, thinking it was time to return him to the nursing home.

I pulled a folded paper from my vest pocket. I read:

“I remember the lights

the death of the Year of the Dog…

chasing its tail backward toward

the dead never return from dancing…

And for once we were young again.

He adjusted the frame of his fingers to capture the seagull flying from the hood of the car into the sun settling behind an inevitable shifting cloud.