Journey As A Circle Searching For Itself

Prelude
To A
Mendocino
Suite

I was driving a cab in New York City living with a woman named Lucinda and a monkey named Zephyr in an apartment near the White Horse Tavern below Sheridan Square in West Greenwich Village where Dylan Thomas, after stacking a pyramid of empty shot glasses on the scarred wooden bar, fell comatose from his stool to the sawdusted floor.

I wrote a poem on that very stool about those years, that relationship. Starvation Madhouse Melodies, I called it.

The poem went up in smoke with everything else.

When I was driving a cab, at the beginning of this story, I wrote through a protagonist named Harry Hirsch.  He was a man fueled by fear, possessed of a keen sense of humor and a questionable sense of direction.  His writing was intense, image-filled and language-based.  He, like I, was influenced by both Dylans (Thomas and Bob,) Kerouac and the Beats, Grace Paley,  and Jean Rhys, too.

For me, there was also Donovan.  “Seagull fly across the sky to set its nest in a Ferris Wheel.”  That image was poetry.  I got it.  Donovan!  Imagine?  Oh yes, I was on acid.

Hirsch, also like me, journeyed from Brooklyn-born, Manhattan-bound cabdriver to a Woodstock, summer-of-love, California-dreaming, living-in–the-woods-welfare-hippie-poet-Fisherman-HousePainter-Mendocino Man -sort of lifestyle.

We came to writing back in those years. The Taxi Stories, Hirsch, my protagonist. And I met my hippie queen.

All that took a decade.

But we separated, Hirsch and I, in the late eighties and nineties, as our lives took different turns. I was attracted to a wife-kids-responsibilities-Berkeley-career change-we-need-health-benefits sort of lifestyle. Writing poetry and trolling salmon on the open sea were left to the memory of a coastal fog.

On the occasions I did write in those years while raising a family and losing my hair, I wrote of a Hirsch consumed with aberrational weight issues, morbidly obese—-  guilt-ridden binges fed by a fire that could not be extinguished  He was a haunted ghost constantly in need of recovery.

Perhaps his life was a tragedy.

For what happened to Hirsch happened in real life. Carved as of stone, cut as in time. 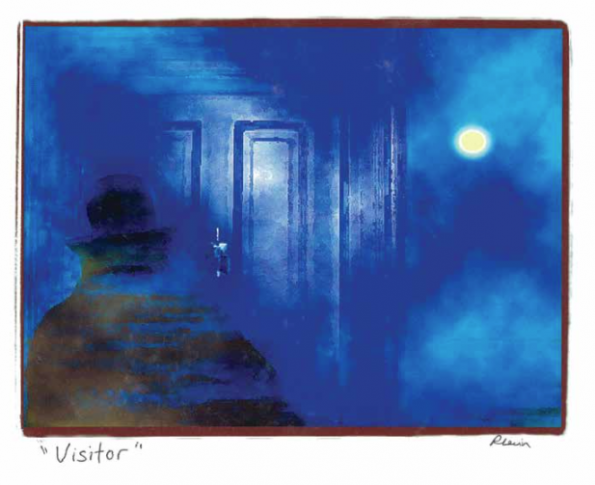 He forces himself up the steps to the porch.  The burning house, wrapped in blistering heat, dances like a skeleton on fire;  fingers of flame from the doorway beckon.

“Hirsch,” I scream, pulling him back from the steps, pulling him to the ground, pressing his struggling body to earth, suffocating his grief with my body weighing across his flailing limbs.

“That’s my baby girl,” he cries and cries and cries, over and over again, beating his fists relentlessly into the damp earth until he collapses into his exhausted destiny.  A destiny where words no longer exist, where objects no longer have meaning— and where we bury what we call our past in stories and our poems; fictions and truths.

I hold him in my arms. Hirsch.

And try not to forget.

For Marlene Ryan Cahn Moon
Whose heart holds onto a deeper, truer story …