A Light in the Back of the Basement

I keep my time with old things these days, poems and stories, diaries and journals, photographs and a lampshade;  a rescued trove of writing held to the worn and fading light of journey and memory and another day; the chaos of a crazier mind, the energy of taxi cab dreams, the callings of a younger man, fishermen off the Albion shore.

There are dreams lost in poems found. What to keep, what to burn, what to remember in the blessing of their many imperfections.

What I have here, carefully confined within the terminal disorganization of the basement in my Berkeley home is the glory of once having breathed life into these masterpieces resting now in a coffin-sized cardboard box unseen lo’ these many years.

Embers of what was the creative fire in your mind, the heartbeat of what was yours and yours alone—Oh, it didn’t have to be great.

It just had to be.

A friend of mine, who has read several of my more recent stories asked if I always write about writing. And I find that’s true a lot. It seems like no matter what I’m writing, there’s this guy wheedling his way into my narrator’s voice, more often than not, capturing the story while I’m figuring out what to do next.

Fictional narcissism is what my dog, Abbie, would call it.

“But isn’t that what writing is— the I and the Eye,” I would answer back.

I believe in natural selection. The small lampshade I fix atop the bare bulbed lamp casts a soft light on the randomly selected folder placed at the corner of the desk in my studio. Within the folder are only a few papers; a few musty papers. I go slow, cautious at the prospect of resurrecting the past.

A tattered note, circa 1973, handwritten from a lover. Her name was Morning Star. Morning Star Leibowitz. She hopes we can still be friends. “Please don’t retreat from me,” she asks. “Don’t leave me clutching at my loneliness.”  I return the note to the folder hoping to never read it again.

I wonder who it is I am that would do such a thing—leave a person in that state of being.

I find my answer on a piece of lined paper torn from a spiral edged notebook—a retort, now barely legible, never sent.

“The light shines,” I can make out written in my faint hand.… “the love seed grows…,” I mean, Ugh!  The note is signed, Love Carlos.

I place it on the pile marked, Burn Upon Death And Bury With Ashes of Poet.

There is also a yellowed paper in the folder on which was typed seven lines of dialogue.

“The ultimate risk is there is no risk,” she said.

I have no clue as the origin nor the destination of this dialogue.  Perhaps a koan I might place in the mouth of a therapist.

I’ll place this one in the fireplace for when the flue is fixed.

Abbie, nudges her way into the studio, leash in mouth, looking expectantly through the curls of her doodle genes bouncing off her head, covering her eyes.

But there is one more poem I feel compelled to read.  A piece I wrote about my taxi driver days— before I came west to the land of Mendocino. Abbie settles herself onto the rug under the painted black piano.

The poem was called A Silver Headed Cane and this is how it went.

Rodeos and light shows too many cigarettes smoked at dawn light….
strung out on white lines and red lights and too many strangers grabbing time for going from here to there…. speaking to the back of my head and a space in the mirror

Where faces look out at

“Ask me for a dime”
THWACK

“What do you think I am”
THWACK THWACK

I wait for the signal to change and a small crowd of passerby’ to gather as they must.

They do and I accelerate to my destiny—

— To Morning Star Leibowitz, the 18-year-old who begged me not to leave her clutching at loneliness;  to George Floyd, Andre Hill, Manuel Ellis, Rayshard Brooks, Daniel Pride, Breanna Taylor, Atatiana Jefferson, Aura Rosser, and more more more so many more who haunt the sadnesses overwhelming the pleasures of the life I’ve lived;  to a box beneath a dim light in the back of the basement filled with paper memories.

I performed Silver Headed Cane in 1974 at The Greenwood Pier Cafe in Elk— Morningstar Leibowitz sat in the scant audience— her head shaved, her wrists bandaged; I cannot look her in the eye.

On the wall of my studio by the window with a view of the camellia bush in bloom this Covid Christmas, there hangs a portrait of me as a young fisherman back in the day when hippies still roamed the earth.  I want to look at him, at myself and say, “I am no longer that person, that I never was,” but I am again lost in the truth and fiction of what was real..

On the worn cover of the folder into which I return these few pages,  I find words penciled in my hand half a century ago.

Abbie, is lying on her back, paws turned to the ceiling, the tender skin of her underbelly exposed. She rolls to her side rising to her feet, downward-dogging.

Venus is rising in the pre-dawn sky. I stand by the sundial on top a hill at Chavez Park overlooking the waters of the bay. Abbie sniffs about the circle of large rocks for any urine coded message that may have been left by one of her tribe.  I wander around in thought and If I am not careful this melancholy will pervade my entire existence.

Abbie nuzzles into my thigh, her dog face imploring me.“ You should see yourself from my side of the leash, you look sadder than a basset hound. Now cheer up. Make yourself useful. Pick up that little present I left you by the rocks or better yet, how about one of those bacon-flavored treats from your pocket,” she sniffs.

I know Abbie is correct. It’s an illusion. It’s crazy—being in that basement believing I’ll find why I was who I am in a box of old writing. And who cares the why. It’s the I am that counts. And I am a sometimes depressed, usually affable old coot in reasonably good health with a family to love and a dog to walk. I have good connectivity, a MacBook Pro and an iPhone, Amazon Prime and Hulu, a Prius; a grandson who makes lemonade, a granddaughter who helps to feed the homeless and a wife with whom to gracefully grow old.

Who should ask for anything more?  Not me! 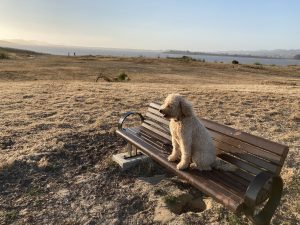 She is on a bench watching sailboats tack across the pale dawn San Francisco Skyline. I join her, petting her lamb-like coat—these labradoodles are such therapy dogs. I feed her a bacon treat and begin talking.

“I do wish I had the courage to leave that damn coffin-sized box right where it is and never look at it again… put it on the Burn Upon Death And Bury With Poet pile… leave the past where it belongs…if I only could. How do I do that, Dear Abbie?

“The ultimate risk is there is no risk.” she said

I believe I am in an epiphany, hoping it’s not another false alarm.

Venus, the morning star, fades into the pastel morning sky behind the hills of Berkeley.  Morning Star Leibowitz rises with the sun into a future I acknowledge is the sum of all I have ever been; the ashes of memory that death is.

“I feel so much better, so much more resolved, Abbie” I say.

“Do you have a license to practice therapy,” I ask.

“Only a license to practice dog, ruff ruff.”

I came to writing early in life, the sixth grade at PS 238 in Brooklyn.  We were studying the American Revolution. “The red coats came over the hill like a plague of locusts,” I wrote. I have been chasing similes and metaphors ever since.