My mother is the oldest of seven children. Growing up, all the families lived in the greater Los Angeles area. We Jordan kids were just five of the 29 grandchildren our grandparents had. Mostly, we were like stair steps, born year after year after year, but in 1960, the year my youngest sister was born, there were four grandchildren born within a few months. My grandparents youngest grandchild and first great-grandchild were born the same year. While some of us lived close enough to attend the same grammar school and high school, most lived far enough away that we saw each other on occasional weekends, for birthday parties (which with so many kids were a pretty regular event), and all the holidays. Christmas Eve at our house, Easter at my Aunt Lola’s, Thanksgiving at Aunt Baby’s, a summer party at the O’Connors because they had a swimming pool, and so on. Cousins visited back and forth and were chosen to accompany families with same-age children on vacations, skiing trips or sailing to Catalina with our uncles and their kids. 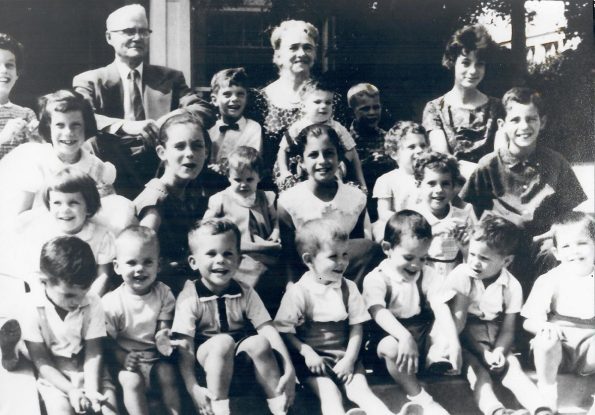 We were also sent to visit cousins to fill time during the long summer or when our parents were going away for a weekend or on a business trip. I was sent to my Aunt Grace and Uncle Don’s. Grace was my mother’s closest sister in age and in friendship. They had six children of their own. The oldest three were girls, the youngest of them just a year older than I. The other cousin closest to me in age was a boy in another family, so I think the adults thought this would be a more fun place for me. But the O’Connors were a far more religious family than mine and Kathy was always so good and trying to be holy. We never became the close friends we were expected to be, but I liked her older sisters a lot.

I’m not sure how many times I stayed at the O’Connors house, but there is so much I remember. Watching my older cousins who were Beatles fans and wanting to be one too, long days of playing canasta and the time I broke the glass top on the coffee table on the patio, slamming my feet down in frustration when I had to take a big pile of cards, the time the little yappy dachshund across the street bit my leg just because I was standing there, working hard to learn to walk on stilts my uncle built, having the breath knocked out of me for the first time when I fell off a skateboard, making cookies and being allowed to eat the cookie dough right out of the bowl, and dessert every night, often ice cream with warm Hershey’s chocolate sauce. So different from home, but so much fun!

But they were not all comfortable differences. Maybe it’s what always happens, but my most vivid memories of staying with my cousins are the things I didn’t like. Things that were very different from what we did at home. While now, as a parent I truly see the wisdom in my aunt’s ways, as a child I objected strenuously, but always quietly and just to myself, to the very idea of big kids taking a nap. It was a rule. Every summer afternoon we went to our beds to rest for an hour. I don’t remember ever sleeping. A ten year old napping? How could I when I was fuming? I’m sure my aunt needed the peace and quiet, but I didn’t and resisted as best I could.

At breakfast in our house, we had a fresh orange or grapefruit every single morning, without exception. At the O’Connors house, they took vitamin C, ascorbic acid, instead. Everyone, everyday, and as a guest I was not exempt. We didn’t even take vitamins in our house. The pills tasted funny and I missed my orange. I wondered how two sisters could raise their children so differently.

By far the worst thing that happened, however, was breakfast on Sundays. I can’t remember if my Uncle Don cooked the scrambled eggs or if it was just his belief that firmly cooked scrambled eggs were difficult to digest, but the memory of the effort of pretending to eat runny scrambled eggs, pushing them around on my plate, gagging on the small bites I felt I had to eat, hiding a few bites in my napkin, and pretending I just wasn’t hungry is as clear as if it just happened yesterday. I suppose my lifelong dislike of eggs may have started at that breakfast table.

As adults, all the cousins have scattered. The O’Connor cousins most of all. Most of us don’t see each other much at all anymore. There are just too many of us, along with our own families, to be included in all the family weddings. Only the occasional funeral draws us together now. Our memories are bittersweet, mixed with delight as we remember so many years ago, the fun times, the adventures and misadventures, the overnights, the holidays, the vacations, and sorrow remembering the treasured aunts and uncles who had such an effect on our lives. All of us have stories to tell.

Invariably, my stories always begin “I remember one time when I was at the O’Connors…”

Peggy Phillips
Peggy Phillips lives in Oakland and is grandmother to two perfect grandchildren. Everything else pales in comparison, but she is also an inveterate planner, mostly of travel, and occasionally writes something worth sharing.