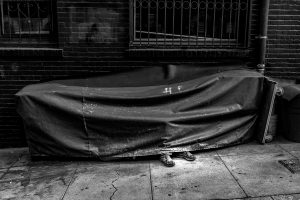 We walk past or around homeless persons every day on the sidewalks of Oakland and San Francisco. Along our city streets and through freeway underpasses we carefully drive past ramshackle homeless encampments.  Some of my images are made from the perspective of a casual passerby. Those photographs show people sleeping or lying on the street under blankets, newspapers, or nothing at all. They are anonymous, faceless, not so much people, as “a social issue.” Other photographs are made from the perspective of a seeker. Those images (and conversations) attempt at understanding and a desire to see those who are without homes (or adequate food, clothing, health care, or employment) as persons possessing innate human dignity, with hopes and dreams, not unlike that casual passerby or more importantly, the photographer himself. Click on images to enlarge. 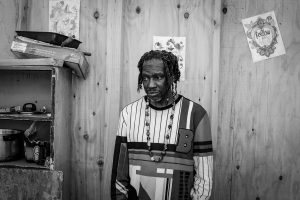 Terrance is enrolled in a youth counseling program at Berkeley City College. Crouching in his tent in a vacant lot on a corner along Martin Luther King Jr. Way in Oakland, he has crowd funding promotional post cards with a related website for which he paid $85. His wife says no one has contributed. Tomorrow he must find his way across town to get dosed at a Methadone treatment center. A convenient bus line is no longer available. His bicycle has a flat tire. Health problems linger from being shot four times as a bystander on a corner in Richmond. He asks to record on my iPhone a rap song that he’s written to the tune of “Amazing Grace.” A recurring verse goes,  “My Jesus said he got a plan for me…” 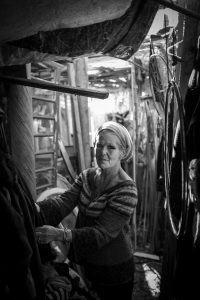 Mavin lives “curbside” on Wood Street in West Oakland. She seems fearless, but says that she’s exhausted from living on the street. She recently met with Oakland city staff to discuss plans for a homeless RV park. She has bigger plans – a park, a job-training program, a market, and “exploiting the gentrifiers.” Her grasp of city ordinances and homeless-related legal issues is extensive. She lost her home in a family estate dispute. She is estranged from her daughter, whom she longs to see. I feebly suggest that all she can do is take it one day at a time. “Fuck that. That is going backwards, a slow death. I have to think about the future.” 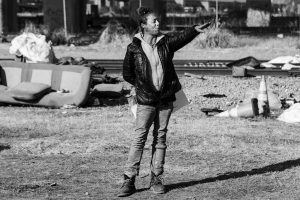 Teresa speaks out fearlessly on behalf of her homeless community. She lectures an Oakland official inside City Hall on detailed failings of homeless policies and programs. In front of her broken down RV next to Wood Street, she tells me about the risks of being a homeless woman. Tears slip down her cheek as she talks about separation from her daughter and family. 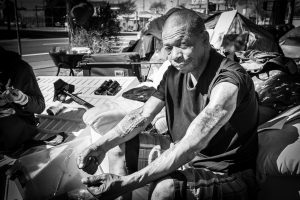 Shawn was an airline mechanic living, when we met, in a tent camp at the corner of Grand and San Pablo Avenues. A colorful tattoo memorializes the loss of his twin children at birth many years ago. A medical issue causes seizures. He is physically strong and a Taekwondo expert. He looks after another man ranting nearby in a fog of mental illness.

Alvin is housing “insecure.” He describes a vicious past and survival on East Oakland streets. He talks about turning away from anger and violence and writes his poem in my notebook:
Love is a painful thrill
and not to love
more painful still
but oh it is the worst of pain
to love and not be loved again. 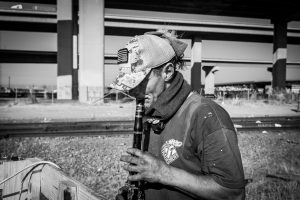 Jason seems oblivious to his chaotic, trash-strewn surroundings as he focuses on repairing a bicycle with inadequate tools. He pulls a clarinet from its case and attempts a few notes, but the shattered reed is unplayable. 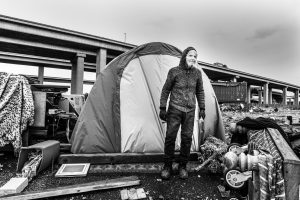 Puffy blames himself for his desperate situation, taking responsibility for his mistakes as he confronts a system and an economy that makes it nearly impossible to dig his way out. 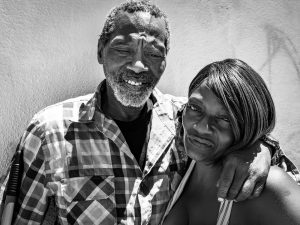 Robert and Teresa live in a car. To kill time he sweeps the street. “I need to work. It’s easy to get here,” he says. “ But it’s hard to get out.” 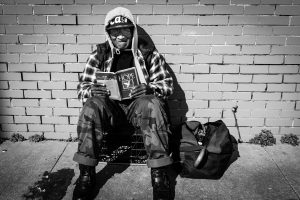 Richard is from Ohio and his plans seem unclear. He is sitting on the sidewalk reading a Bible. The cover says, “Hope.” 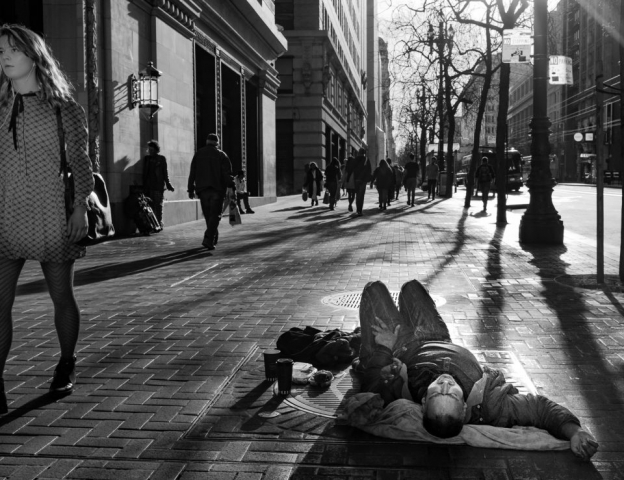 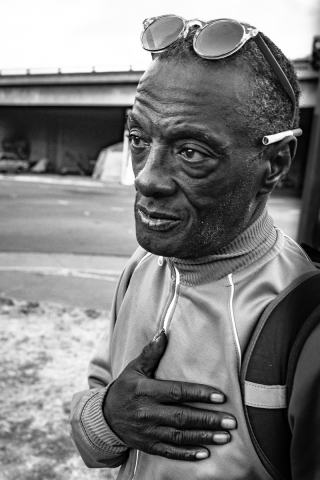 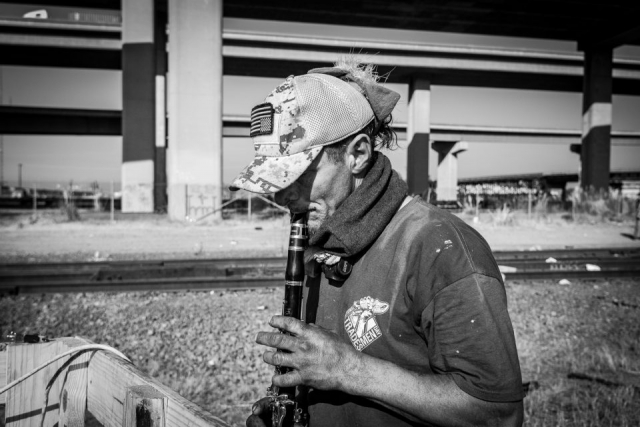 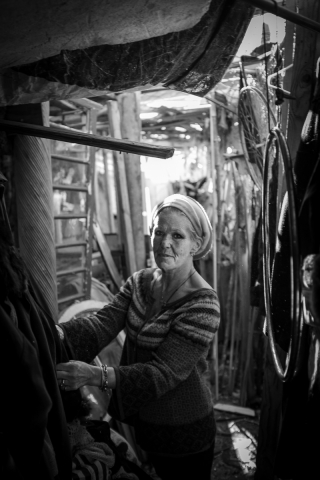 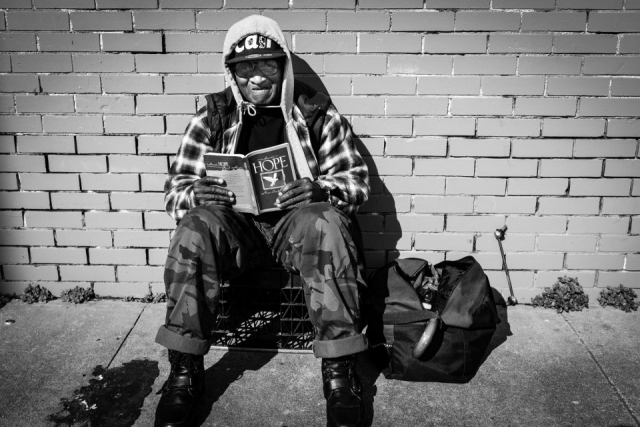 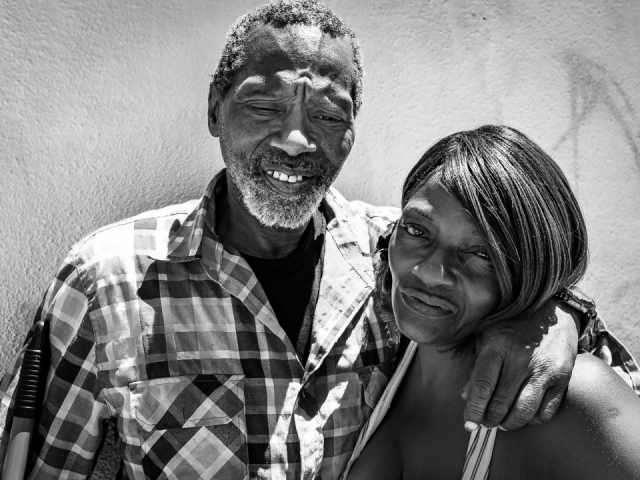 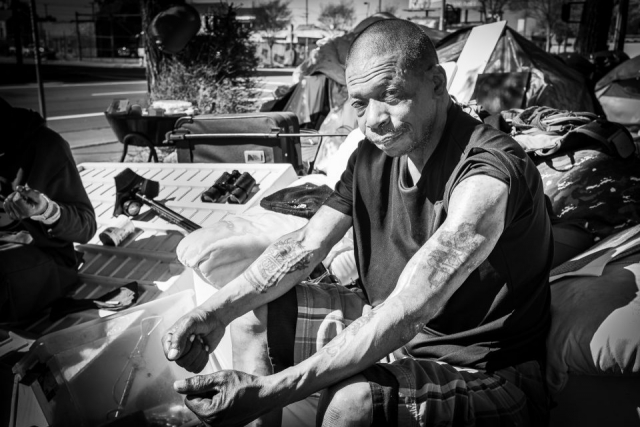 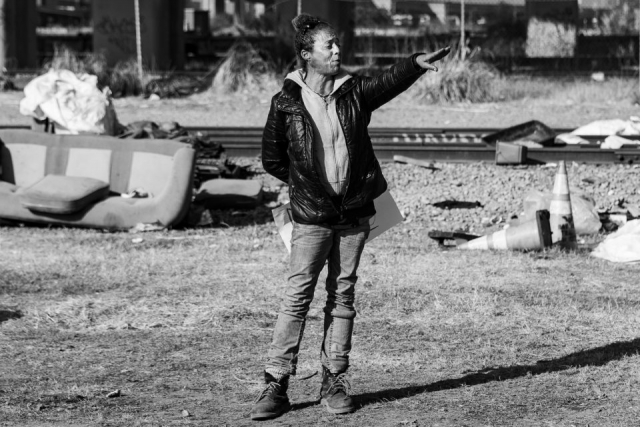 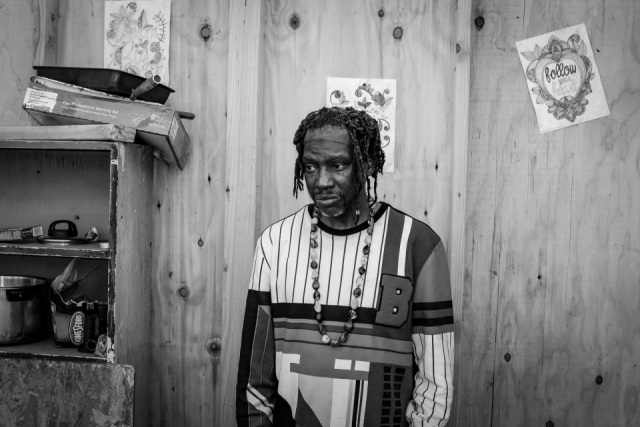 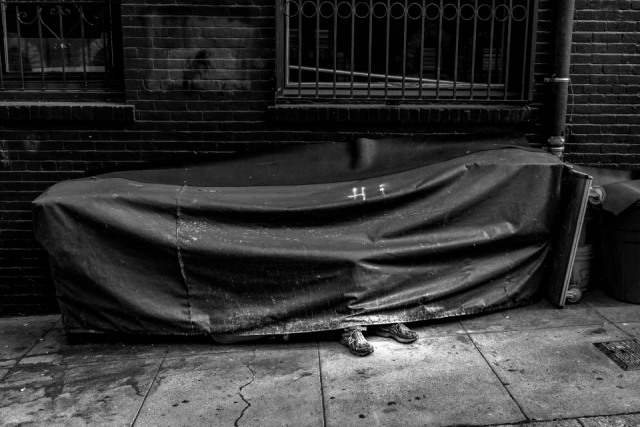 Daniel Danzig
Daniel Danzig is a street and documentary photographer from Oakland, Calif. More of his work can be viewed at danieldanzigphotography.com