The day after the bloody siege on the Capitol, I dug out an 8 x 12 black and white glossy of a bunch of teenagers standing on its steps. There’s me and forty-six classmates posing with our Congressman, John B. Anderson (who would later run for president as an Independent). We’d just graduated a few days before, the Hanover High School class of 1966. For three days we’d been packed on a bus, traveling from our little town in Illinois, stopping along the way to tour Gettysburg.

The senior class trip to Washington, D.C. was a Hanover High tradition. We’d held endless after-game dances and car washes and magazine and bake sales to pay for it. Perhaps the dazed look on our faces in the photo was from staying up too late and eating too much junk, but I think it was also from being overwhelmed by that beautiful, sacred building.

When we were given some free time that afternoon, most of my classmates went shopping for souvenirs. My pal Ray and I couldn’t understand why they would pass up a chance to explore the Capitol. We got passes to the visitor’s gallery and watched Gerald Ford, then minority leader of the House, pontificate about something or other to a nearly empty chamber. He was eight years away from becoming president, charged with restoring decency and integrity after Nixon’s Watergate scandal.

I remember that we sat in the first row of the gallery and looked down on the semicircle of polished desks where for generations the brilliant and the boneheaded had pledged to uphold our fragile constitution.

In the basement we found the subway that connects the Capitol with the House and Senate office buildings. Just as it was pulling away, a guard called it back and a tall, lanky man got on board and sat across from us. He looked vaguely familiar, someone whose picture I’d probably seen in LIFE magazine.

“Now where are you from,” he said in a Southern drawl.

“Well, your senator, Everett Dirksen, is a good friend of mine,” he said with a big smile. As the train pulled into the Senate-side platform, he extended his large hand to us. “I’m Strom Thurmond from South Carolina,” he said. “Real nice to meet you.” That he was a racist and ardent segregationist escaped us at age seventeen. We’d met a real senator and we were impressed.

Nine years later, I had an apartment in its shadow. I walked past it nearly every day on my way to roam the halls of Congress where I covered hearings and buttonholed staff for a health policy newsletter I co-owned with another woman. I used the Capitol subway between buildings to the avoid the cold of winter and the oppressive humidity of summer. In the fall and spring I sometimes ate my lunch on its steps and observed teenagers posing with their Congressman.

As a credentialed reporter I sat at the press table and watched the likes of Teddy Kennedy and Bob Dole and Al Gore quiz people representing various and sundry interest groups about arcane details of proposed health policy legislation. It was wonk heaven.

A story I broke about a scandal in a health care agency department led to a hearing by Teddy Kennedy’s committee. He even held up my newsletter and quoted from it as he grilled the agency heads. My proudest moment as a journalist. 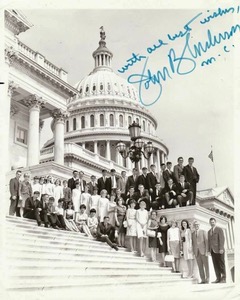 Those were the days when you could freely enter the corridors of government on the Hill. No metal detectors, no bag checks. When you could spread a blanket on the lawn in front of the Capitol and listen to a concert by a military band almost any night of the summer. When you could sit on the Capitol steps and watch fireworks on Memorial Day and the 4th of July. When you could stand among a peaceful crowd and witness a newly inaugurated president emerge from the Capitol and ride past in an open limousine so close you could see the freckles on Jimmy Carter’s face and Ronald Reagan’s rosy cheeks.

Those were the days when Congressmen were able to be both adversaries and friends: Ted Kennedy and Orrin Hatch, Russell Long and Daniel Patrick Moynihan, Joe Biden and Strom Thurmond.

In his farewell speech on the Senate floor before assuming the Vice Presidency in 2008, now President Joe Biden reflected on his experiences representing Delaware. He talked about his unlikely friendship with Jesse Helms and Strom Thurmond, men vehemently opposed to the very issue for which he’d chosen public service – civil rights. “This is an incredible place…. It has left me with the conviction that personal relationship is the one thing that unlocks the true potential of this place. Every good thing I have seen happen here, every bold step taken in the thirty-six-plus years I have been here, came not from the application of pressure by interest groups but through the maturation of personal relationships.”

He went on to say, “I believe in our ability to work together with people with whom we have real and deep abiding disagreements, especially in these consequential times, is going to determine whether we succeed in restoring America. I think it is literally that fundamental and basic.”

How sentimental and naïve his words sound in the wake of January 6.

In 1979 I sold my share of the newsletter business and went to Europe. For two months I wandered with nothing but a backpack and a fist full of travelers checks. I saw the sights in Paris and Florence and a half dozen countries. But the most beautiful sight came at the end of the trip, at night in a taxi driving east along Independence Avenue. There it was, the Capitol dome lit up as always, as though welcoming me home.

I mourn for those innocent times as I view the mob — urged by a sitting president — breaking down the Capitol’s ancient windows and doors and streaming through its sacred halls and galleries, set on doing bodily harm to those assembled in the House chamber. I mourn for our uncertain future in a country where a huge portion of our population has been radicalized, where elected officials would willingly overthrow our democracy and refuse to even investigate the riot that threatened their lives and killed five people.

I fervently hope Biden and Harris can bring sanity to our divided nation, that they can “succeed at restoring America.” I hope they and other leaders can be kept from harm. I hope that one day soon it will be safe and possible again for a high school kid to stand in awe on the steps of the Capitol and fall in love.

Karen Hunt
Karen Hunt spent 15 years as a journalist in Washington, D.C., during the Carter, Reagan, and George H. W. Bush presidencies. Her beat was health policy. She once followed a Finance Committee staffer into the men’s room to get a quote.