One evening at the dinner table during that late spring in ‘39, my father announced to my brother Daniel and me that our family would be moving to Fresno, California, where he had two sisters and a brother and their families. It was not too far from Los Angeles, where he had another sister and brother. The silence at the table and my mother’s downward eyes told me immediately that only one of my parents was happy.

We had lived in New York City all my life. My father came from a farm just outside Sacramento, until he went to Stanford on scholarships and loans. After college, he went east to NYU for law school and stayed in New York to work as a young lawyer. My mother was from a very small town called Glens Falls in upstate New York. She couldn’t wait to escape to the big city and came to New York City after high school to take college courses and work as a secretary. Later she became a writer for Harry Warner, the Warner brother who stayed in New York. He was in charge of publicity and finding new scripts for the movie-making brothers in Hollywood.

My parents had met at a party given by a mutual friend and the rest is family history. They settled down in the City and my mother assumed they were there for good. There was enough to explore for a lifetime. She was in love with the New York Philharmonic, the opera, the theaters, the art galleries, the food, the interesting streets, Central Park, and the Hudson. If you had time to listen, there were dozens more places she could never leave. .That night, with the four of us eating dinner just like any ordinary evening, our lives were changing forever.

My father, his bright blue eyes shining, added that we would sell our decrepit Buick –and buy a new black 1939 Buick which would easily transport our family of four to the Golden State. It was now time for me to be in a healthy place and for all of us to get out of a crowded city and move to a place where we could have a big house and, best of all-a garden with vegetables and fruit trees. My father was adamant. The doctor said I needed a hot dry climate, or I might relapse. We knew no one in Arizona where the climate was suitable. In Fresno, however, relatives would welcome us with navel oranges, grapes and open arms. The car was soon bought–a gorgeous 1939 Buick. It had a large back seat and a running board and was the envy of the other children in our apartment house. Being bedridden, I hadn’t seen any of them for almost a year.

My mother’s mother Rose, who had been living for many years with her spinster daughter Anne, announced that she was coming to California with us. My mother, as I remember, was shocked She gave all the reasons she knew to try to dissuade my grandmother–and I remember them well. Fresno had no delicatessens, my grandmother didn’t know anyone, and no one spoke Yiddish. In New York she had many shopkeepers to talk to, knew the bus system. She would miss my aunt, with whom she had lived for many years, she had several friends–other immigrants she could talk to.

My grandmother Rose, illiterate, an escapee from a pogrom in Lithuania, came to America at 16, sent for by an aunt who had recently immigrated herself. Rose had lived in Kovna until the Cossacks came on horseback and rode through the shtetl with sabers killing as many Jews as they could find. Rose, who was outside the house heard the horses’ hooves coming. She ran into the forest and hid until they left. Her whole family died and soon afterward, Rose was taken to Vilna, to live for several years with an aunt. Then the trip to America, sent for by an aunt in America, who knew of her plight.

Rose married soon after– a peddler in the Jewish/Italian lower east side part of New York, filled with other impoverished immigrants. She and my grandfather, Morris, moved some years later to Glens Falls, helped by an uncle named Kaplan who had a dry goods store there. My grandfather still kept doing his peddling with a horse and cart kept in a barn near the house. He died at 36 from a heart attack and my grandmother Rose made do. She raised her four children alone, working part-time in her uncle’s store. My mother’s two older brothers dropped out of school to get jobs and the family survived.

But back to my father’s plan. To say my mother was disappointed doesn’t begin to describe her complicated feelings. She grieved leaving the city of her dreams. My father, on the other hand, was ecstatic. And then, the night my grandmother came to dinner and stated “ I want to go to California with you.” the table was in shock. She couldn’t read, couldn’t drive, She knew New York City like the back of her hand – every bus and every bus driver, on her varying routes. She had a few friends who also spoke Yiddish. Why California?

My father turned toward my mother at the dinner table. “ If Rose wants to go to California and stay with us – then she will”. My mother paled — and started arguing with her mother in English and Yiddish. The conversation was quick and my grandmother was firm.” I’m going to California”. My mother gave all the reasons that it would be difficult. According to my father, it was a done deal.

The next morning I heard my father singing in the shower:

“California–here I come–right back where I started from, Where bowers of flowers bloom in the sun. Each morning, at dawning, birdies sing and everything.

That’s why I can hardly wait,
SO OPEN UP THAT GOLDEN GATE… 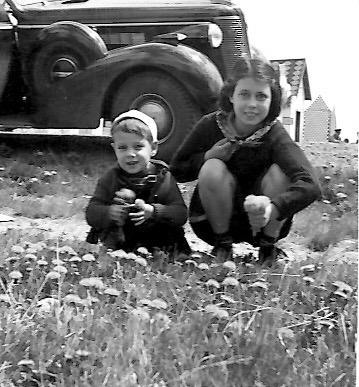 Marion, Little Brother, and The Buick

He’d sometimes continue with the gentle words of this old American folk song:

“There’s a long long trail awinding– into the land of my dreams. Where the nightingale is singing and the bright moonbeams.

There’s a long long night awaiting — until my dreams all come true. Til the day that I go walking down that long long trail with you.”

To this day those lyrics still resonate in my head. My father sang these and other typical American folk songs for three thousand miles on our three-week journey across the United States. My parents and my brother and I were dressed in casual clothes. We sat in the wide back seat on each side of my grandmother, who was dressed for New York City, not a national park -or Iowa. She wore one of her “good” dresses, not a housedress, and had her purse and gloves on her lap. The beauty of our country, which I had never imagined, helped me heal from the many, many months of my only view–the brownstone apartment house across the street from 123 West 74th Street.

My father promised my mother that each year she would take the train to New York to visit old friends and he and my grandmother would take care of things at home in California. She left every year in the spring on the Santa Fe with her hat and gloves. She saw the friends who were left and after my brother and I were out of the house she and my father flew there and went to the museums and theater. Each time she came back and said she was glad they lived in a quiet place like Fresno. New York was way too hectic.

Marion Bar-Din
Born in New York City, transplanted to Fresno, Calif., lived with my Israeli husband in Israel for two years. Majored in English literature because of my mother—who made our family’s living during the depression by writing. She wrote almost every day when I was growing up. My father wrote too, as a lawyer and Judge. I became—what else? An English teacher, and ultimately a psychotherapist. I’m currently writing memoirs as part of a writing group, who are the kindest most creative people I have known. I have some free time for the first time in my long life, and can both write and enjoy my four daughters, ten grandchildren and four great-grandchildren. Being “locked in’” for a year has given me the opportunity to think, remember, daydream.