When he died, my father’s funeral arrangements and financial affairs fell to me. Years earlier, at my urging, he had set up his modest estate as a trust which made it easy to administer and disperse to his children whom he named as his sole beneficiaries. The funeral was well attended; the wake even more so. One by one, his friends pulled me aside to tell me how much they loved him. They raised their glasses, cried over him and toasted to his everlasting memory.

The morning after the wake, I put away the liquor, emptied the coffee urn and drove the ninety miles to his apartment which was part of a large-ish apartment complex on the suburban edge of a Central Valley town with mature trees overhanging the walkways and parking areas.

He lived on the ground floor in a one-bedroom apartment with knobbly drapes and an asbestos popcorn ceiling. His compact kitchen had real wood cabinets though, not laminates. Good quality but there wasn’t much in them. I knew that he ate out for most of his meals except when he was dieting. For those times, he would make and eat a cabbage soup. The sour smell of cabbage lingered on his stovetop.

The sparse living room furniture encircled a large television set, perfect for watching sports. We often talked on the phone about our favorite teams. Occasionally, I would drive up there to catch a game with him. He played football in college and knew the game well. Even as an adult, I learned some of the finer points of a game he loved by watching as he provided commentary.

As I entered his apartment, I had to step over the mail that had piled up on the floor inside the front door. It would need my attention at some point but, for now, I wanted to look over the entire apartment and figure out the best way to itemize his belongings. I made my way through the hallway to his bedroom. His bed was set against the far wall. Next to it were a floor lamp, and a night stand covered with photos of us, his six children.

From the long, narrow closet taking up the other side of the bedroom, I pulled his clothes off the wooden dowel, six hangers at a time, and piled them onto his bed. I found an Irish woolen cap on a hook which I set aside to take home for myself. The rest of the mountain of clothes and shoes, including high-quality suits cut in various styles that marked the passage of time and fashion, I marked for donation to St. Vincent de Paul. 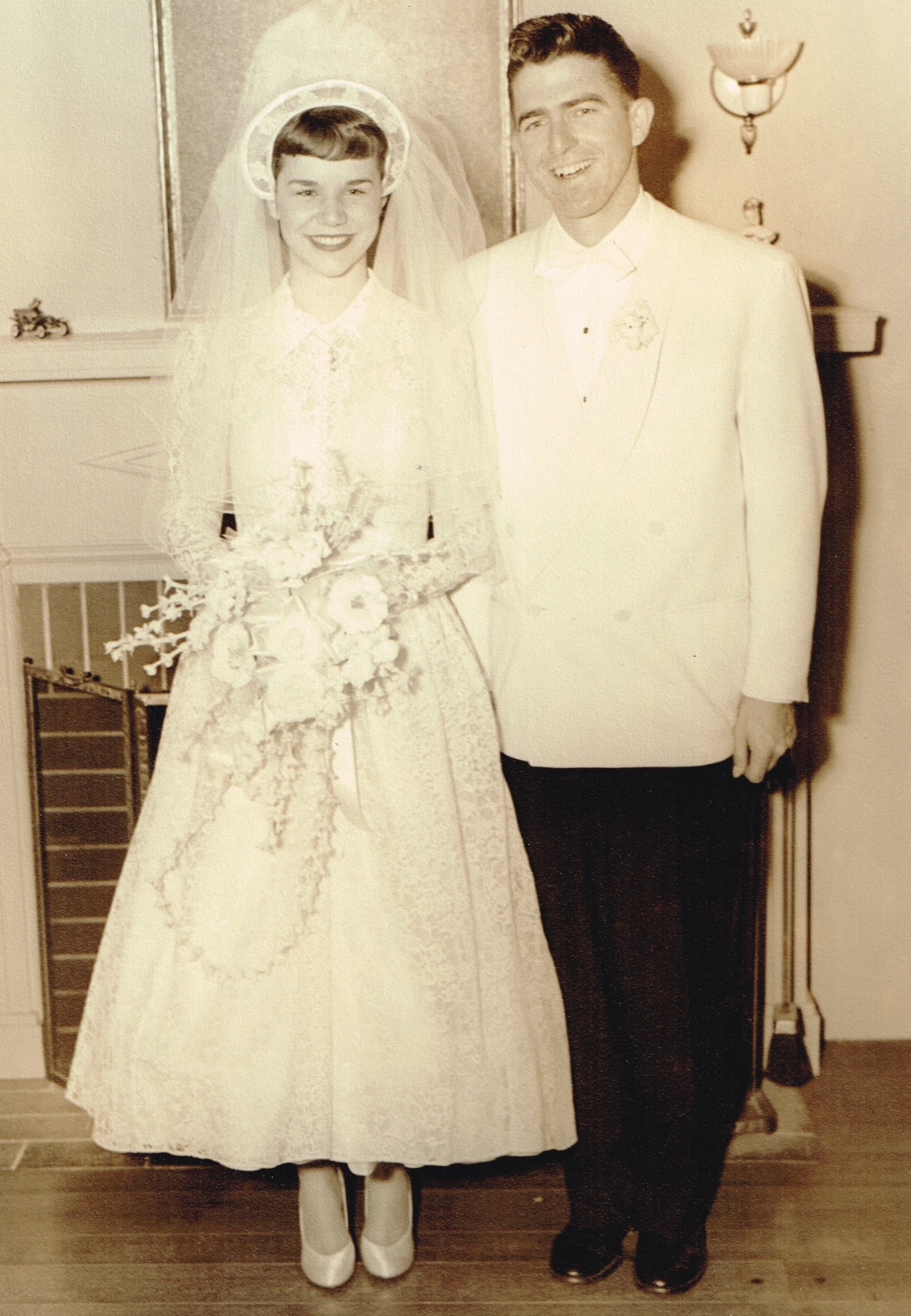 At the far end of the closet rack was the white dinner jacket he wore for his wedding. Although it had not been worn for over half a century, the jacket still smelled of Old Spice and Vitalis. Around the top button hole were traces of a rose-colored stain from the boutonniere he wore when he married my mother. I ran my fingers back and forth on the lapels and considered what to do with this formal jacket from the Fifties—the Age of Cool. On a whim, I tried it on and looked into the mirror that covered one of the doors of the closet. It kind of fit. As I stared into the mirror, I decided that it damn near fit me perfectly.

After I pulled out the last of the clothes, the only thing that remained in the closet was a small, ironclad safe deep in one corner.

I sat down next to the safe with a page of “important information” that he had given to me before he died. Using the flashlight app on my cell phone for illumination, I scanned the list of hand-written passwords and account numbers until I came across what had to be the combination to the safe. The numbers–36 right, 23 left, 36 right—made me smile. A typical joke from him about how his women should measure. I turned the knob to each destination. As it clicked on 36 to the right, the safe opened.

I was kind of hoping to find some letters to or from my mother or other close friends but there were none. But then, he was always more of a talker than a writer. 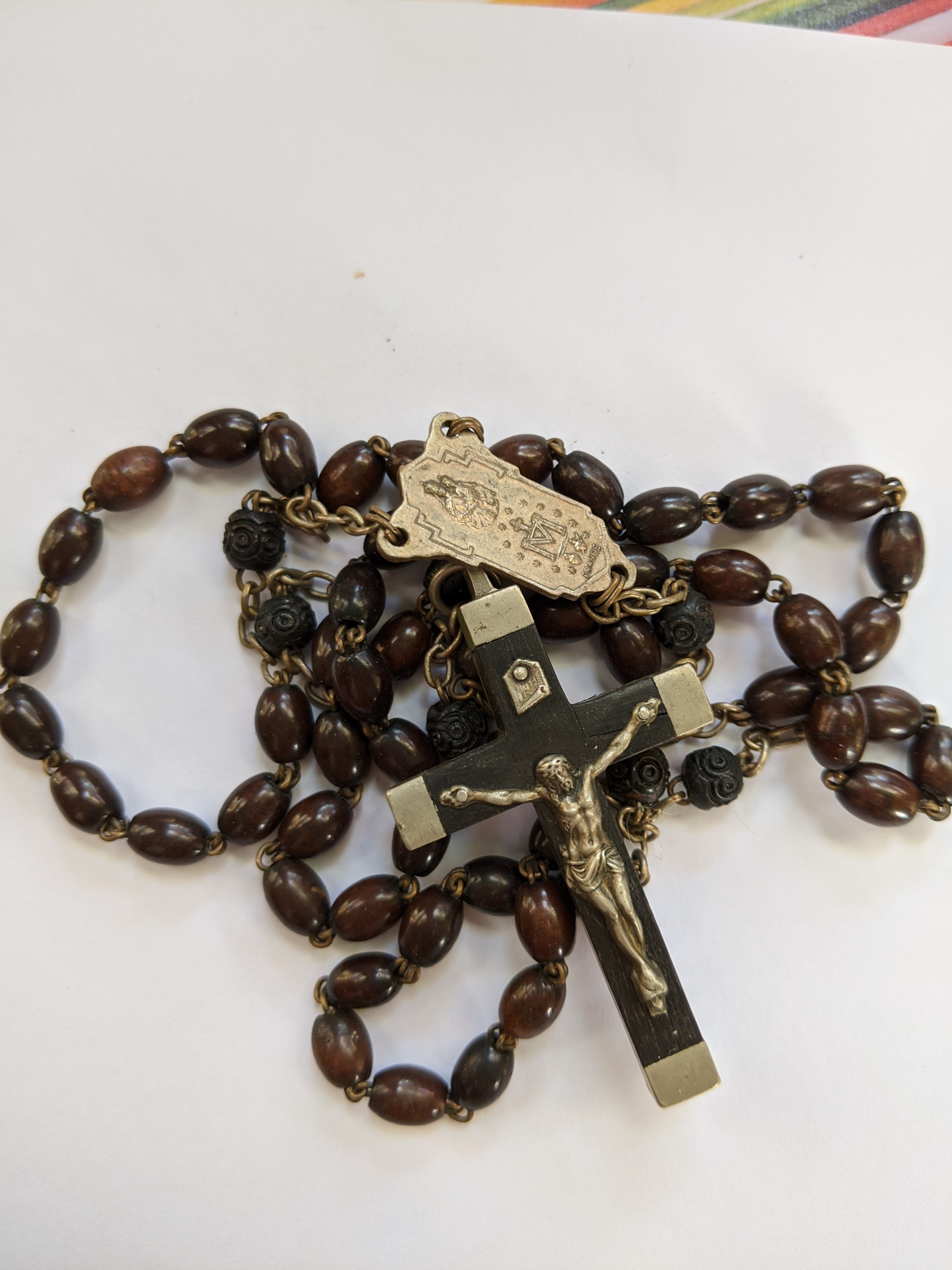 Reaching inside, I grabbed what turned out to be his high school and college class rings, and a rather delicate pin inscribed with Sons of Excalibur. I set the pin aside, along with the Irish cap. A tattoo of the word ‘Excalibur’ in gothic script had always decorated his left arm. His right arm featured a much more roughly drawn and badly inked “Rogues.”

At the wake, I listened to stories from his high school friends about the Sons of Excalibur, and about their “secret” society: the Rogues. The highlights included nailing their shop teacher into his office and then calling in a missing person’s report on him to the local police. They also threw their typing teacher into the school pond along with 12 or 13 typewriters in retaliation for his flunking several of them. They reminisced of fights with other gangs, cars “borrowed” for joy rides, and other rites of passage. In appreciation for his work on behalf of the Rogues, my father was barred from participating in their graduation ceremony.

With the Excalibur pin and his class rings, he stored away several very nice watches and three sets of golden cuff links. None of these were familiar or of particular interest to me. I put them in a zip lock bag to give to my brothers. The last few things—an unengraved silver lighter and magnifying loupe—I put on his night stand next to a photo of me graduating from college. It was the Seventies. Wearing jeans and a plaid shirt, no gown or suit, and sporting long wild hair, I graduated, with honors, and with no idea of what I was going to do next. But he was still proud of me for attending a good school and graduating with honors. He told me that many times. The picture of me on his night stand was evidence, I guess, of his affection.

After I lugged the safe out for eventual disposal, I came back to the closet to give it one last look. Only then did I spy two tight scrolls that had been lodged behind the safe. I sat down on the floor, still wearing his white dinner jacket, and reached for the scrolls. 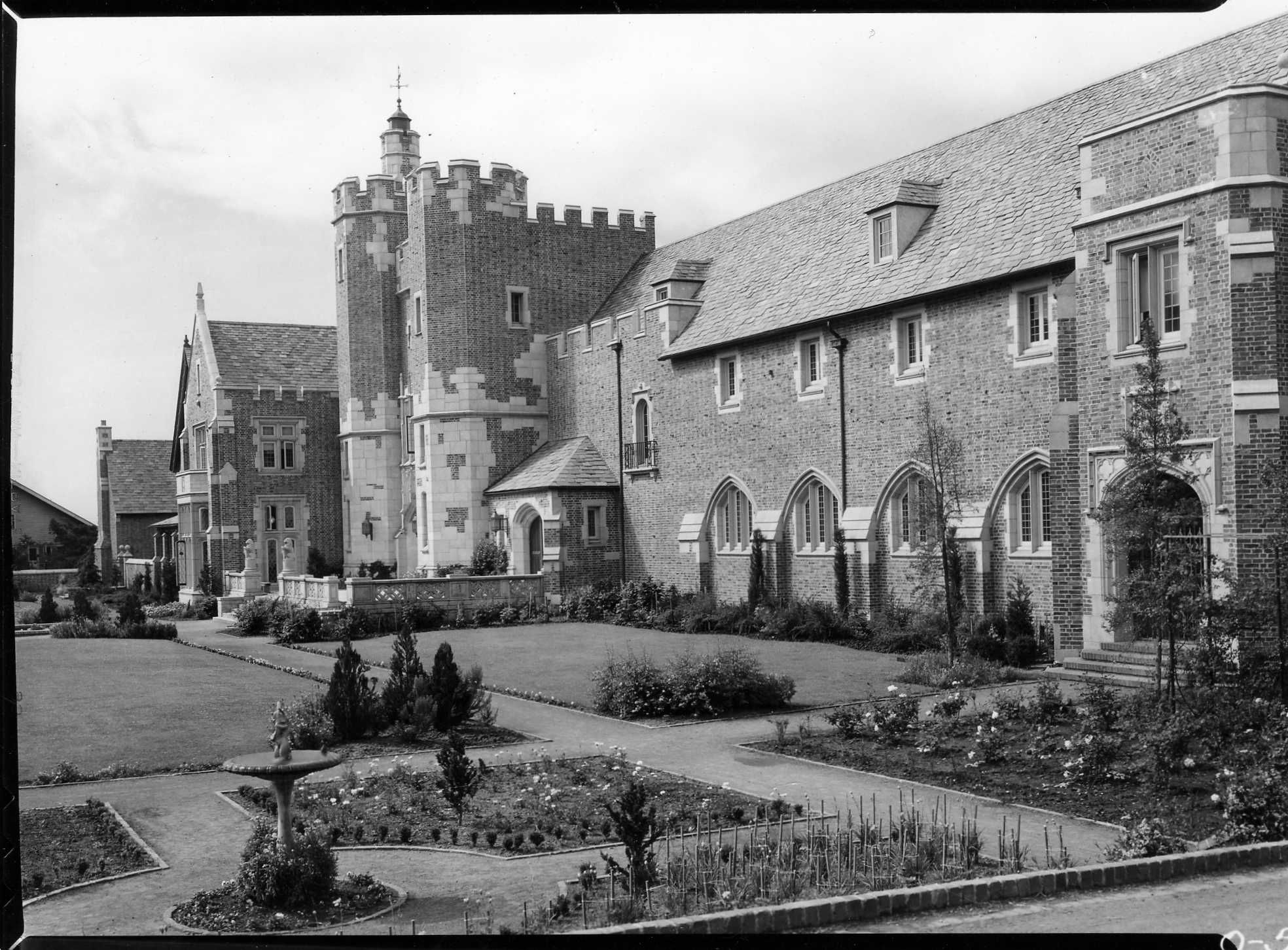 The light was poor. I reached for his bedroom floor lamp and adjusted it to shine directly at the spot on the floor where I rolled out the scrolls. The first was an art photo of his high school which stood on a woody hill of an otherwise urban neighborhood. The Romanesque structure had gargoyles leering down from their perches on the turrets and towers, a stately stone staircase leading up to a massive entrance, and a moat-inspired pond in front—a feature that figured prominently in the Rogues’ mythology. The castellated structure was either a monstrosity or quite beautiful. Regardless, it was strikingly out of place. I let go of the edges of the photo and it snapped back into a tight scroll.

The second scroll, about 12 inches high, was bound with a faded ribbon. I slipped the ribbon off and slowly unrolled what turned out to be another scrolled photograph. It was a long reveal. I placed his high school yearbook on one side to hold it in place. The photographic paper had become brittle over time. I was worried it would crack and disintegrate as I handled it.

Fully uncoiled, it revealed a panoramic photograph of 100 or so children sitting, kneeling, and standing in front of their elementary school. The shot was composed to catch the children as they were: curious, bored, restless but vaguely obedient.

As I peered into the image, I could see that their clothes were worn but clean. Dungarees, T-shirts and canvas sneakers for the boys; simple dresses and saddle shoes for the girls. I could see that the boys’ raggedy sneakers had been washed recently and the girls’ saddle shoes polished. I grabbed the loupe from the nightstand and bent down to systematically scan the faces until I settled on my uncle’s patient, slightly bemused stare offset by the insolent glare of my father who was sitting next to him, cross-legged, in the front row.

A remarkable record, shot with real skill. Definitely from the Thirties. Maybe a WPA project? I looked in vain for a watermark or embossment. As I pondered the photo, it occurred to me that maybe there was something on the back to identify its origins.

Carefully, I turned it over and secured it with the yearbook. As if it were their  personal Declaration of Independence, each child in the photograph had inscribed his or her name on the back. As I perused the signatures, I found my uncle’s modest schoolboy cursive and my father’s more stylized, John-Hancock-style signature. The rest of the signatures were similar to my uncle’s with the exception of a few that were printed in the block letters of children who had never mastered cursive writing.

My father kept this scroll through high school, his years in the service, his college years, his married life and, finally, into this closet. But did he ever roll it out? Did he ever use it as a talisman to conjure the past?

I gathered the scrolls, the pin, and the cap, along with the dinner jacket on my back, to take back with me. The rest of the sorting could wait for another day. I was anxious to get home. 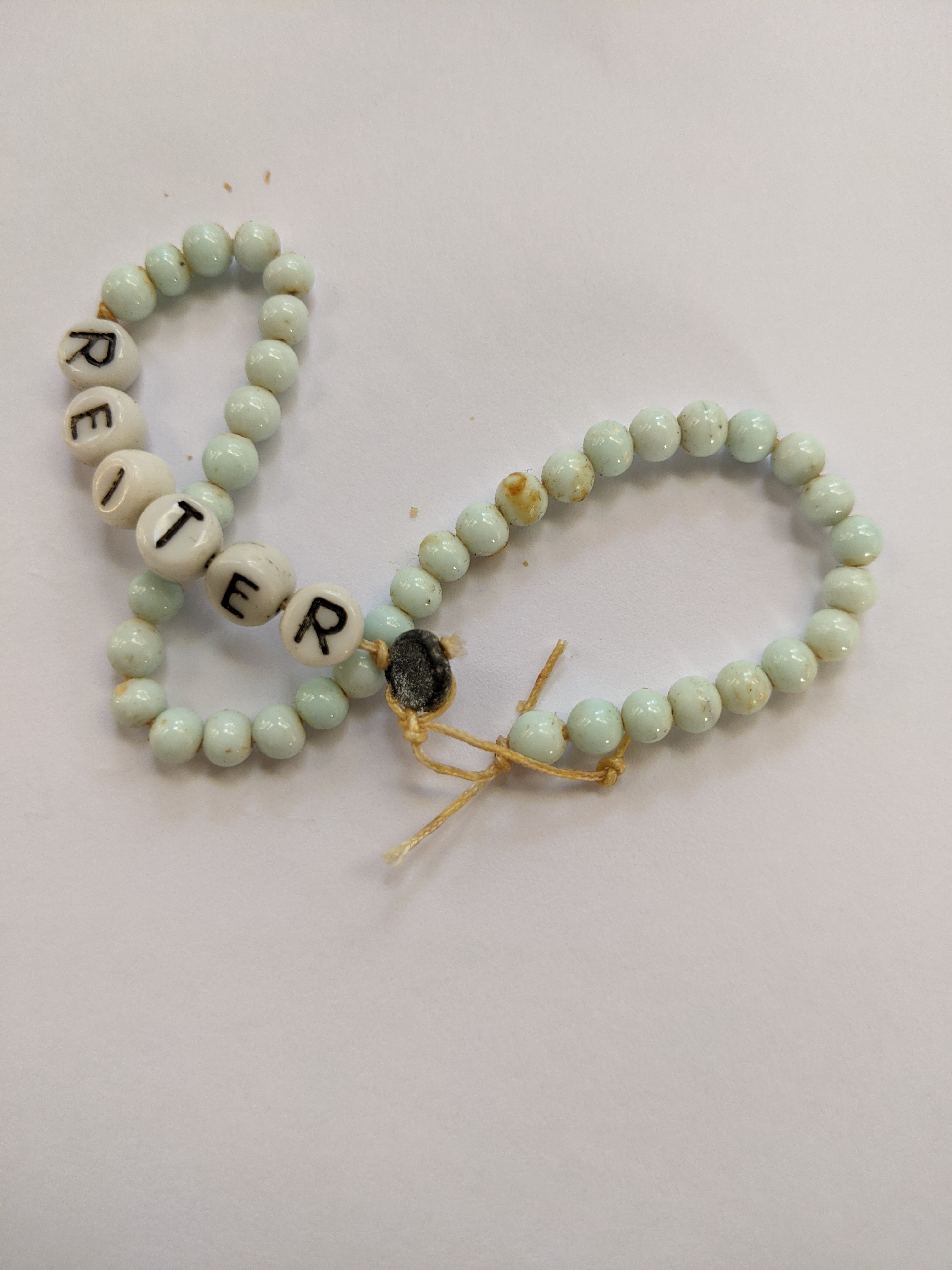 At home, I pulled out a box from the back of my closet. Inside were a few chosen baseball cards, some boyhood letters from my cousin who was two years older than me, and a Crown Royal Canadian Whisky velvet bag that held my best marbles, the beaded wrist band that I wore home from the hospital when I was born, the carved rosary beads given to me by my godfather when I was baptized, and other totems from my childhood.

It also included my report cards from fifth and sixth grade; my classmates and I used to sign each other’s report cards on the last day of school. I look at those signatures, from time to time, to remind me of my place and my time. My father’s school photo with the signatures on the back has become part of this ritual. I focus on him and his brother, both of them un-grown up, not yet locked into a path to maturity. 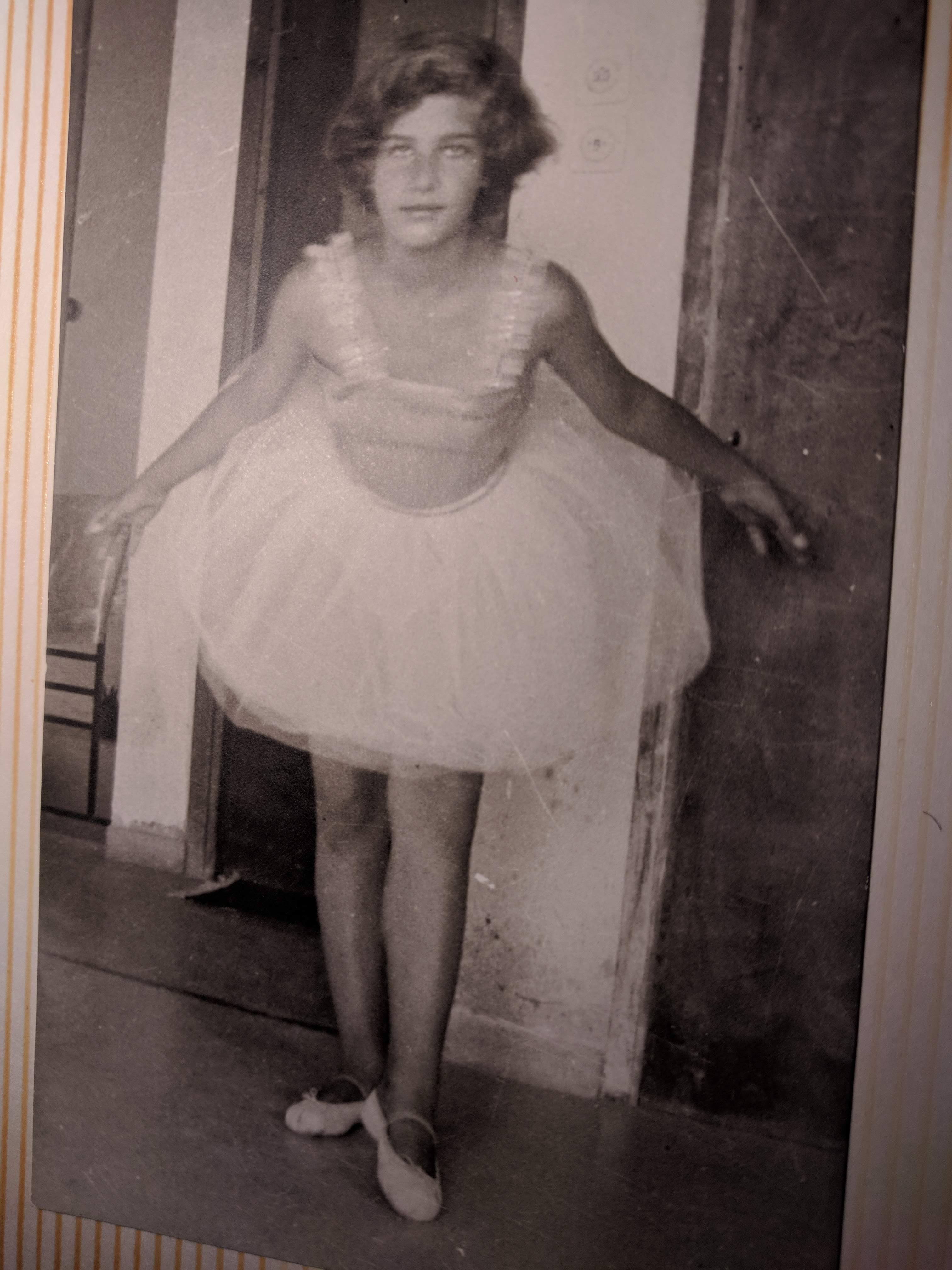 Then I look at a photo of my wife as a young girl dressed in a ballet tutu bowing to a camera held by her father just months before he died. This private moment, cherished by both of them, captured for eternity, will fade into obscurity when my wife is no longer around. A lovely picture without context.

The historical thread of my father’s class photo has been broken. His grade school and high school were both demolished years ago. His teachers, parents, siblings, and school friends now lay at rest; their knowledge beyond my grasp. The photo will remain, though, as a ray of memory, connecting his story to mine. Until I die and fade into the wilderness of time.

Duff Reiter
Duff Reiter is currently learning to turn memory into memorable prose. He used to play basketball at courts around the Bay Area until the COVID virus struck. Now he is teaching his granddaughters to play the piano and to love the beautiful game of basketball.