The air had finally chilled in Oakland as the days crept towards Halloween, but Manny didn’t notice as he stood barefoot in his driveway in a pair of Spider Man pajamas.  A red bandana covered his eyes, but he could hear the key in the padlock on the garage door and the little grunt his mom made every time she started lifting it, followed by the slow metallic glide as it opened.

“Ok Manny.  You can take off the bandana.”

But it was off before she finished saying his name and he was there next to her, sliding his hands over every part of the bike, exclaiming, “Yes! This is so cool!” Manny could see right away that it wasn’t a new from the store bike.  The pedals were scuffed.  There were tiny scratches on the shiny silver frame leading up to the handle bars.  But the tires looked new and the color was freshly painted and perfect—bright electric blue.

“I’m glad,” she said, beaming in her slippers, holding her coffee in one hand and messing his thick black hair with the other.

“Well, I thought that needed an upgrade too,” she said.  She pointed to the lawn mower.  Sitting on top of it was a sleek black helmet.  Not round like the one he’d had since he was four, but slanted as if shaped by the wind. 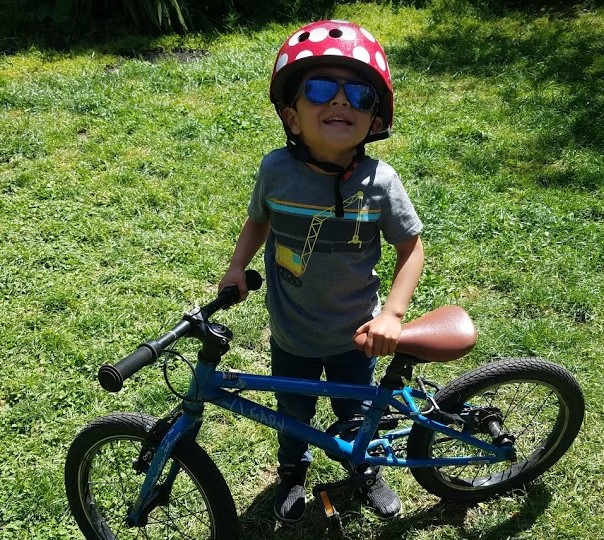 He plopped it on his head and started to fasten it.

“How about some shoes first?” his mom said.

“Oh, right!”  Manny flew inside and got dressed in a flash.  His mom opened the gate in front of the driveway, refilled her coffee and waited outside for him.  As he strapped on his helmet for the second time she asked, “So, what are we going to call this bike?”

Manny looked up at her and smiled.  “Blue Bolt,” he said, and off he flew.

By the end of the week Manny had ridden Blue Bolt on every block of The Seminary, his neighborhood in East Oakland.  He couldn’t wait for the weekend when his mom would drive him to the BMX park in Richmond to work on his jumps.  But Saturday morning mom needed to clean and work on lesson plans, so he was sent to the neighborhood park with Rita and Charlie. It was a small playground squished between an apartment building and a house, but it was five blocks away and he could ride his bike there.

Charlie, who was in 7th grade, walked next to his five year old sister, Rita, who rode her magenta scooter.  Manny rode ahead, but waited for them at every corner. On Dog Block, Charlie trotted and Rita scooted full speed as a pit bull, then two Doberman Pinchers and then some other large dog with sharp teeth barked loudly at them from behind gated driveways and yards.    “Eeeek!” Rita screamed as she scooted down the block.  Manny didn’t scream, but he reached the corner in record time.  “They can’t get you, Rita,” Charlie reminded her (and himself). “They’re on double lockdown.  Locked gate and electric fence.  No te preocupes.  We’re almost there.”

Manny knew most of the kids who lived in the apartment building to the left of the park, either from school or from Saturday mornings in the park, but they weren’t out yet.  So he practiced the monkey bars and acted as a customer for the restaurant Rita was operating from under the slide.

“Ew!  We don’t have worm muffins!  Only blueberry.”

“Alright. I’ll have one of those then.

As Manny handed her a crisp air dollar, he saw a second story door fly open behind her.

“Julian!” he called, waving his arms.  Julian smiled big, raced down the stairs,  and squirmed through the “shortcut”—a hole in the fence separating the parking lot of the apartment building from the park.

“I was worried you’d be watching cartoons all morning,” said Manny, as Julian jumped over the bottom of the slide.

“I maybe would’ve.  But the power just went out.  My mom says it’s the whole neighborhood, so this park is about to get crowded!”

Julian was right.  Within fifteen minutes there were twelve more kids running, jumping, climbing, sliding and yelling all over the park.  Manny, Julian and Sherlyn played spy tag.  Rita found a friend to start a unicorn parade with.  Charlie raced another big kid back and forth along the gate next to the sidewalk.  Manny wouldn’t have looked at his watch if his stomach hadn’t told him it was lunch time. His mom was expecting him back by noon, so it was time to leave the party.

“Can we go the long way, Charlie?” Rita asked as they neared Dog Block.

“No, Rita.  Just cover your ears. They can’t get us.  Here—I’ll carry your scooter,” Charlie offered.

All three looked straight ahead as they passed the first yard, then the second, and the third.  No one noticed that the gate of the second house, home of the Dobermans, was unlocked. But Charlie wasn’t covering his ears, and he heard the barking grow nearer accompanied by another sound–paws clicking on the sidewalk right behind him. He scooped up Rita and yelled, “Run!”  Manny looked back to see Charlie sprinting with Rita in his arms.  He was fast but the dogs were right behind him, their sharp teeth flashing as they panted at his heels. 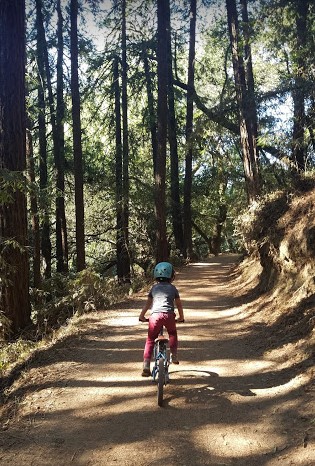 “Come on, Blue Bolt,” he said.  Then Manny turned his bike around and pedaled as fast as he could towards Charlie and Rita, towards the dogs.  Charlie looked at him with confusion and panic as he barreled towards them.

Still holding Rita, Charlie jumped out of the way.  Manny’s legs brushed against the two dogs as he pedaled right between them.  The dogs stopped, turned, and headed towards Manny.  They chased him to the end of the block, then slowed, and looked back at Charlie and Rita.  Manny looked back to see the dogs turning around again.  He jumped off his bike and yelled,

And that was all they needed.  They whirled around like two wheels on a Lamborghini, and took off again in Manny’s direction. By the time his feet hit the pedals again, they were about two feet away.  Manny pedaled.  He didn’t look back.  They didn’t bark, but he could hear their heavy breathing and their paws hitting the cement.  His face was hot, as he clenched the handle bars and pedaled with all his strength.  A cool breeze washed over him. It grew stronger and stronger, and with the increasing wind his pedals resisted less and less, until they felt like they were moving on their own.  He felt like he was flying. 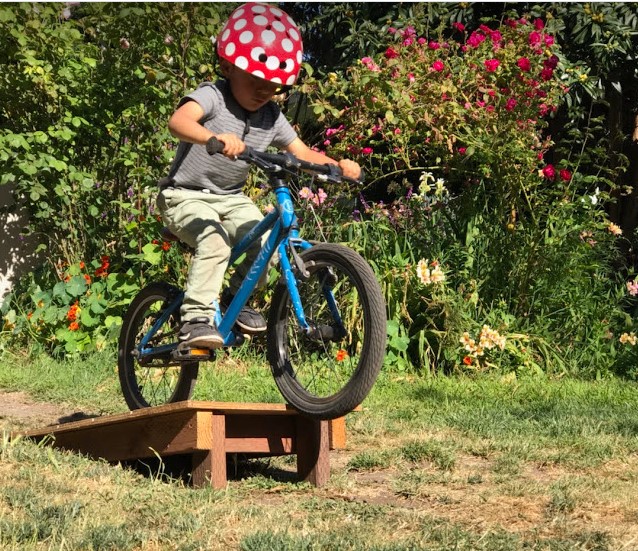 He looked down, to check that his front tire was still on the ground. Of course it was.  He could ride like this all day, “Yahooo!” he called out, as he whooshed along.

He knew without looking that the dogs were gone.  He felt light and free. But then he thought of his mom.  She would want to know that he was safe.  I’ll turn around at the end of this block, he thought.  And that’s when he saw the Golden Arches of McDonald’s, straight ahead, two blocks down. McDonalds?  No way.  The nearest one was 98th and International, on the other end of East Oakland from where he’d been biking.  But there was the pupusa cart and the car wash, and a street sign that read, “International Blvd.”

Manny felt confused and slightly panicked.  He’d never been this far from home by himself.  Then he saw the express bus heading down International, towards his neighborhood.  He reached into his pockets.  Nothing.  The bus driver probably wouldn’t be as happy with his air money as Rita was.  But it would take at least 30 minutes to bike home from here, if he went his fastest.  He biked to the bus stop.  When the doors opened he said, “I don’t have any money, but I really need to get home.”   The bust driver’s face didn’t change.  It stayed grumpy.  He shook his head and threw his thumb back, which Manny knew was bus driver for “Get in before I change my mind.”

Manny hoisted Blue Bolt aboard and held on tight to the shiny metal pole.  The express bus had its own lane, so he got to 62nd Avenue much faster than he would have in his mom’s car.  “Thank you!” he called, as he dragged his bike down the steps and onto the sidewalk, two blocks from home.

Kathy Moore
Kathy Moore is an elementary school educator, mom, writer, and maker of exquisite salads. She lives and works in East Oakland, where she draws inspiration from her surroundings and the wonderful people who challenge her and make her laugh every day. She hopes you enjoy her first go at a children’s chapter book!