Palm trees shifted restlessly overhead. The dead fronds around their trunks made them look more like giant bottlebrushes than trees. “Can’t anyone figure out how to trim those things off?” I mumbled to myself. They had the look of ruin.

My husband hunched over a Kindle at a table in the shade. I could see that he was barely tolerating the heat. Behind him, a sign with red neon letters saying “ICE” hung down from an open doorway.

Our 17-year old daughter sat on the rusty chaise lounge next to me, her slender legs slung down the long cushion. She’d forgotten her swimsuit and had borrowed some underwear from me, a bright pink pair that was clearly visible below the hem of her SF 49ers t-shirt. I thought she’d be self-conscious about such an intimate display, but I was wrong. She was engrossed in Me, Earl and the Dying Girl, which we’d just picked it up at a bookstore in Beverly Hills.

We were in Los Angeles to find a sober living house where she could piece her life back together. Things had been complicated for my beautiful girl from the very beginning. Hours after birth she’d come down with meningitis, a trauma whose reverberations seemed to linger. Then there were the sensitivities she inherited—to people and sounds and the ineffable sadness of living—which meant that life had been difficult for her, and us, for a long time.

I’d spent years trying to fix things, had been certain I could fix them, saw the problems long before anyone else did and set out to head them off at the pass. But, in the end, I’d had very little effect. Maybe I’d made it worse. We’d been through psych wards and wilderness programs and residential treatment centers, and the time had finally come to look for a sober living house we could afford.

As we’d driven to this motel, heading east from Beverly Hills to Hollywood, I’d watched the chichi shops and overpriced stores on Melrose Avenue glide by: Rag and Bone, Helmut Lang, and Theory with its chic black clothing. I usually saw these brands in the pages of Vogue at the hair salon, but now here they were in person, tantalizing me.

“Look at what the happy, rich people get to wear,” I’d smirked.

“Not as good as my sweatshirt from Tar-jay,” my daughter said. We pulled up to a stoplight next to Herve Leger with French gowns hanging in its windows. I tried to decide if I’d wear the pale blue one with sequin trim, given the chance.

“Bring on the po’ folk!” my husband said, and we all laughed.

But really, longing had overtaken me like a fever. We sailed past cafés where people lounged around sidewalk tables at 3 o’clock on a Thursday afternoon, surrounded by empty wine glasses and nursing full ones in their hands. Elegant neighborhoods appeared like oases in the desert, their well-trimmed palm trees swaying above sculpted hedges and manicured lawns. Women who looked impossibly hip floated from store to store as if relaxation were their birthright.

I had to convince myself this wasn’t the Promised Land, that these shops and cafés weren’t portals to glimmering new worlds. Somewhere around here there had to be actors whose careers were tanking, screenwriters whose latest scripts had been passed over, women whose husbands had left them for a new fling. In this shimmering mirage, I was trying not to drown.

Inside the car, it was a kind of détente. After our fights over Xanax and vodka and cough syrup, after the unwitting pressure on her to get it together, after her forced exiles, for once I was too exhausted to mount a campaign or make a plan.

We passed another wine-drenched café and I quipped, “The family that looks for a sober living house together… stays sober together,” using a well-worn joke that had endless permutations.

“Yeah, right, Mom,” she said in mock exasperation. “It’s more like, ‘The family that looks for a sober living house together… gets aggravated together!’”

“Bring on the aggravated family!” my husband said, again making us laugh.

He eased our car up to the curb outside the pink stucco Rodeway Inn in Hollywood.

“Daaaad!” she complained, half serious and half joking. He’d reserved the motel and, of course, it was Spartan, if not depressing as hell. My husband was not an extravagant man, but when you added the financial pressures of our daughter’s care, he could become downright extreme.

We stood on the sidewalk, staring at the faded pink walls. It looked like they hadn’t been painted in years, except for various patches that were more orange than pink. We laughed about that too as we lugged our suitcases out of the car and hauled them up to the large glass door with metal trim. It was stuck, so we had to shove it open, heaving laughter into the lobby as we stumbled in, me proclaiming, “The family that stays in a dumpy motel together… just stays together!”

The woman behind the desk was large, with round cheeks that squished her lips out in an unassuming pooch. She had long, dark hair that thinned into wispy streaks across the shoulders of her mismatched tracksuit. She was quiet and respectful. I was surprised by my instant love for her. I made an effort to meet her eyes as she gave us our key cards.

We walked along the dirty indoor-outdoor carpet past the leaf-filled pool that my daughter and I had gleefully spotted when we came in. I tried not to pine for the comfort of beauty. When we got to the room it stank of smoke.

Now my daughter and I sat on the rusty chaise lounges. A lemon tree hung over the fence that encased the pool, steadily dropping yellow leaves onto the turquoise water. On all four sides, motel rooms with cheap, white doors and rococo trim rose in layers above us like an overwrought cake from Safeway.

I tried to ignore all the signs with bright red letters that outlined rules for the pool, but it was impossible. One hanging near the laundry room made me decide to stay out of the water: “Persons having currently active diarrhea or who have had active diarrhea within the previous 14 days shall not be allowed to enter the pool water.”

An older woman in a bikini sat nearby, talking loudly on her cell phone. A bare-chested man in ripped cargo shorts and flip-flops perused the paper. I wondered what the people who shopped at Herve Leger were doing around their elegant pools.

Two cigar labels were stuck to the umbrella pole next to me.

“Hey, check these out!” I said to my daughter, “I wonder if they’re Cuban.” I was hoping to garner some interest because she’d once smuggled a Cuban cigar into the country for her godfather.

“Dang, maybe so,” she looked up from her book and smiled at me, only briefly, a little distracted, but a light glowing inside her. I could see it.

I wanted to talk more, as always. She seemed to eternally exist out beyond the long tunnel of my longing. I usually tried to connect us with words, asking questions or explaining things, like how life would get easier for her as she got older, how some of the coolest people on the planet didn’t fit in as kids. But my words didn’t hold us together. At least that’s how it felt. So this time I was silent. This time I let her smile linger in me. 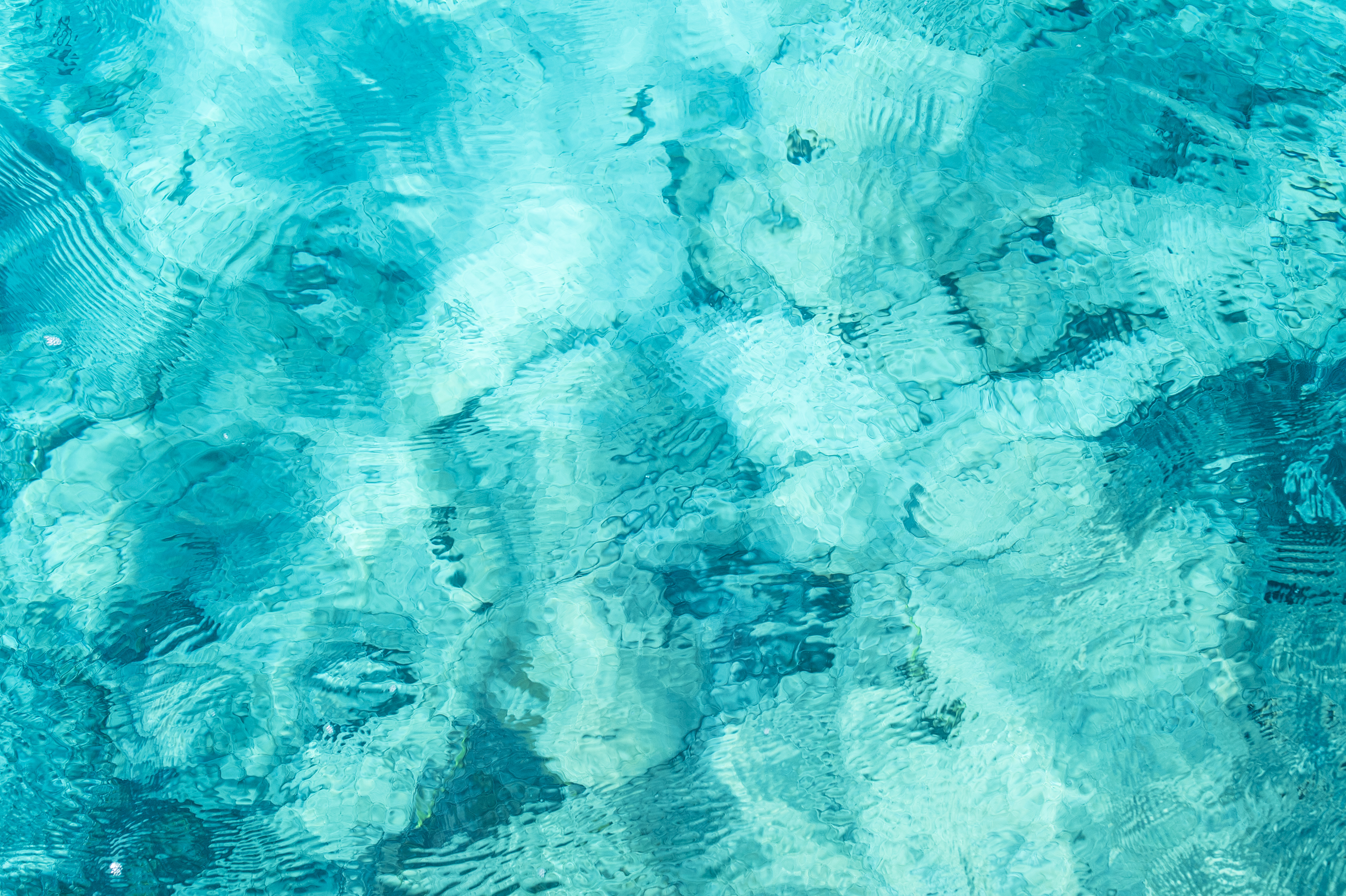 The lemon tree released a leaf, a whirling poem that began at its branch and ended with a scrape against the concrete. I looked at the tree. It was lit from below by undulating triangles of light cast by the turquoise water’s constant motion. The pool’s reflection even danced across the motel walls like a neon sign advertising something. Something important. What was it?

Another leaf fell, tapping lightly on the concrete. I looked at my daughter. Suddenly I could see that the pool was illuminating her legs as the tree’s shadows moved in syncopated rhythms over both skin and light, one melody introduced and followed by the other like a fugue. I could feel it all at once, the world whispering silently across us. Little had I known that my daughter would smile at me like that, would laugh as we tumbled into this place, that the receptionist’s cheeks would be so beautiful, that the pool was busy lighting up so many things.

Gail Kurtz
Gail Kurtz writes personal essays on her favorite subjects, including birds, Buddhism, and the complications of being human. She recently retired from UC Berkeley, where she produced fundraising letters and reports for the College of Letters & Science. She has written for a variety of local organizations, including the Golden Gate Audubon Society, Black Pine Circle School, Marin Grief Counseling Center, and the Golden State Nurses’ Organization.